Japan has some of the highest quality fruit in the world. It is grown with incredible attention in order to produce both exceptionally beautiful and exceptionally delicious fruit. Sembikiya is a famous gift fruit store with a number of branches in Tokyo. They sell these exquisite fruits and fruit products (for quite a hefty price) but some locations also have a fruit parlor.

Just before my trip to the US Raku and I decided to treat ourselves to desserts at the fruit parlor since we wouldn't see each other for six weeks! It's been two weeks already - I don't know how we'll make it another four.

We went to the Sembikiya in the Kitte building near Tokyo Station, and waited in line for fifteen or twenty minutes before being seated because they don't take reservations. We poured over the menu which is filled with different fruit desserts, and even fruit sandwiches and a curry made with fruit. Eventually I decided on the classic fruit parfait.

The parfait was composed of layers of different fruit ice creams and sorbets, whipped cream, and then topped with slices of many different fruits. I'm not usually a fan of whipped cream, but this cream was amazing, it was sweetened and flavored with vanilla, and wonderfully heavy and thick - not the normal fluffy milkiness I dislike. The ice cream was wonderful too. I particularly remember the banana ice cream and the raspberry sorbet. But to my surprise the fruit was not incredible. It wasn't bad, but it seemed distinctly average, which was really disappointing considering the store's reputation. Raku agreed with my assessment, and while we definitely enjoyed our time and the desserts we were not left with the feeling that we needed to come back.

I hope that our experience was atypical, but based on my one visit I think you can find plenty of more delicious desserts for less money in Tokyo. Unless you're deeply interested in Japan's fruit culture this probably isn't a must-do. 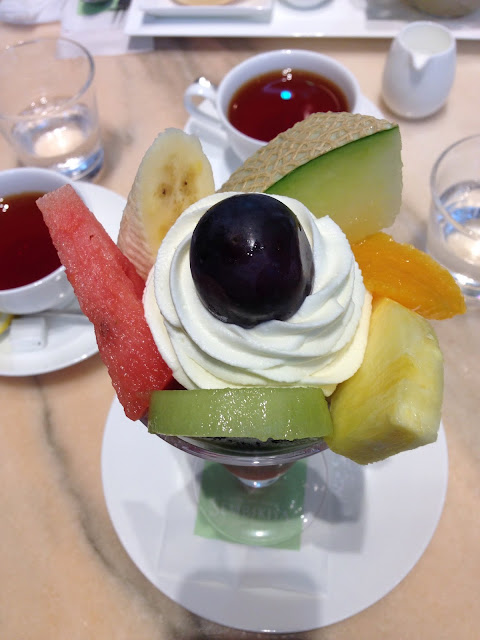 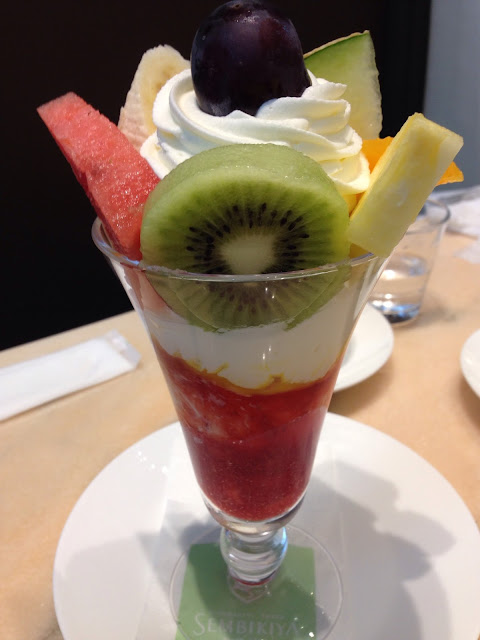 It has been so hot this summer, and you better believe I've been using that as an excuse to eat a lot of ice cream! In fact, I decided that my blog gave me the perfect excuse to "research" and try all the different ice creams I've seen over the years but never bothered to try. I tried to narrow it down to five because that seemed like a nice round number, but I really couldn't pick one to kick off the list, so here my list of six ice creams I've most enjoyed this summer.


Ever heard of prepackaged soft-serve ice cream before? Before buying this I had no idea what it was, though I guess it's pretty obvious from the packaging. It's a little pouch of soft-serve with a spout at the top to suck the ice cream out of. It wins points for uniqueness and creativity, and they are constantly rotating new flavors. The quality is a little lacking, it's not the richest ice cream and the consistency is a little icy. (In fact, cheaper ice creams are often not true ice creams but ice milk - you'll see them labeled lacto ice "ラクトアイス") But it works in a pinch, and doesn't make a mess. 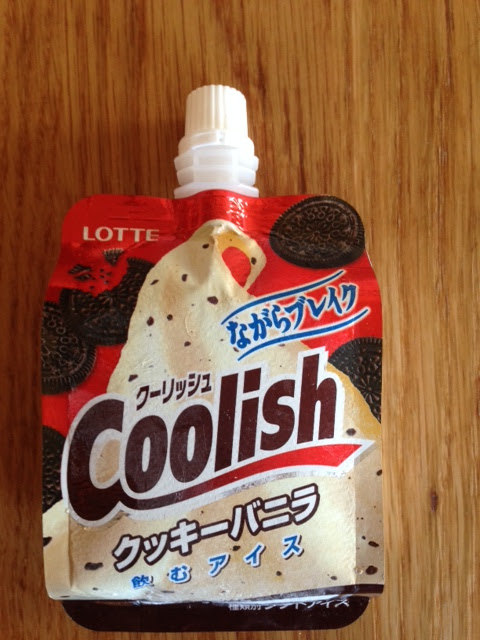 Ice cream sandwiches are sadly lacking in Tokyo, but there are a number of different ice creams that come wrapped up in a cone, but in a more sandwich-y shape. The Zakrich is a triangle shape, in a sugar cone, basically a choco taco. They come in assorted flavors - I chose vanilla with a layer of chocolate on top. It was pretty decent quality and very satisfying, even though this is also lacto ice. If you're more of a wafer cone person, there are also ice cream bars that are sandwiched up in that. 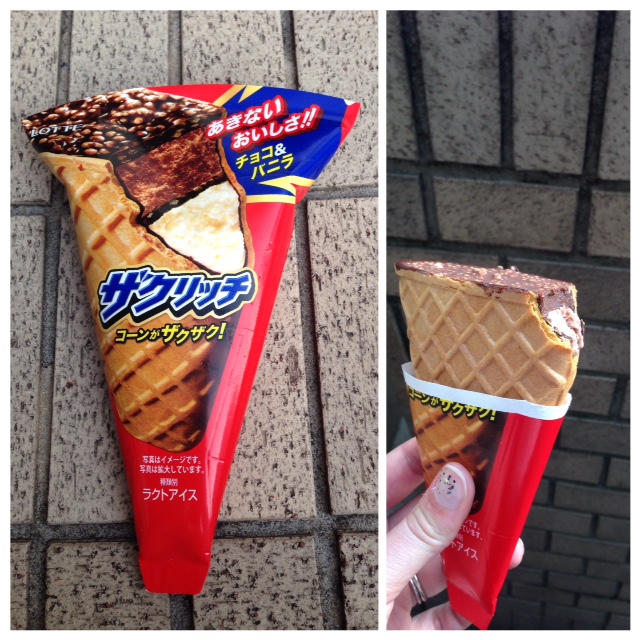 Pino gets on the list for it's adorable factor. It's a tray of six little balls of ice cream dipped in a coating - I chose chocolate, but there are often other flavors like raspberry or caramel, that you can eat with a little plastic skewer. This is a true ice cream, not a lacto ice, and you can tell it's better quality. 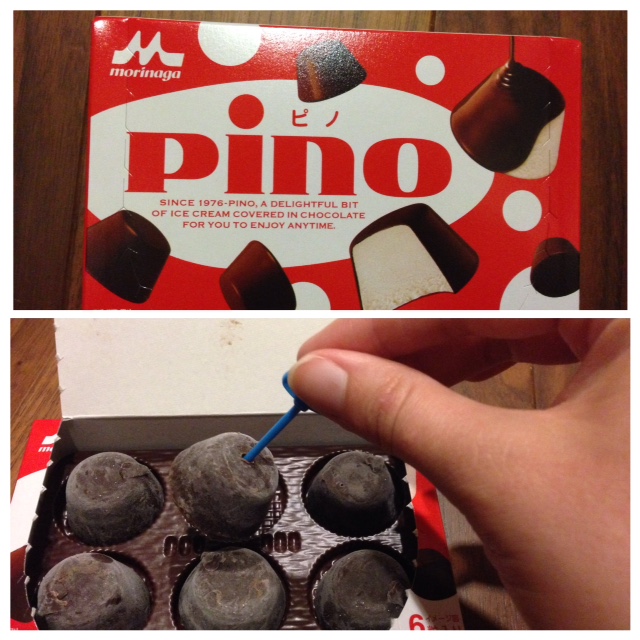 Shiro kuma means white bear, and this ice cream is represented by a polar bear. This one is actually a lacto ice again, and it's noticeable thinner than ice cream, but because it has a mild yogurt flavor and is topped with fruits the texture works. I think it was genuinely meant to be a lighter dessert not just a cost saving effort, and it's very refreshing. I really enjoyed the fruit toppings, and the fact that the serving size is bigger than a lot of the other options even though the calorie count isn't significantly higher. 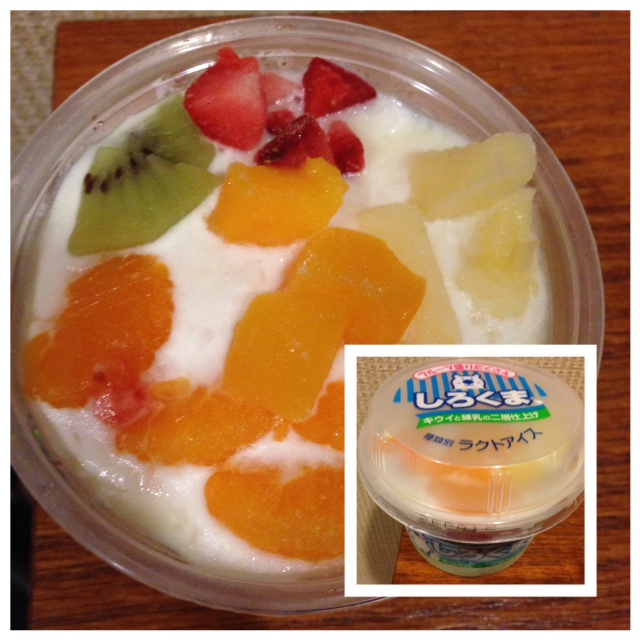 I only discovered this ice cream over the past weekend, but wow is it good! From the wrapper I thought it would be like a good humor bar, but it turns out I don't know my Japanese. Baribari is the onomatopoeia word that means crunchy, and this mint chocolate ice cream bar, technically lacto ice, was coated in a a crunchy chocolate and toffee layer. The texture and flavor go together so well, and seem wonderfully summer-y. I found it in a Family Mart, and it's possible that's the only place they're sold as I haven't noticed them before. 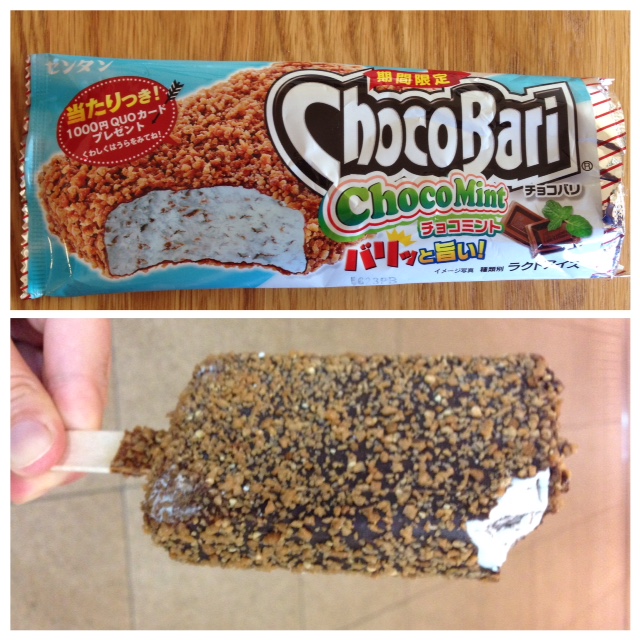 These are harder to find in the conbinis, 7-Eleven is probably the best shot but you're more likely to get them at a grocery store, and they're by far the most expensive at 400 yen for a single cup. But, they are oh-so-good! The ice cream is so rich and creamy, there's definitely no skimping here. And the flavors are so intensely chocolately. Definitely worth the indulgence. 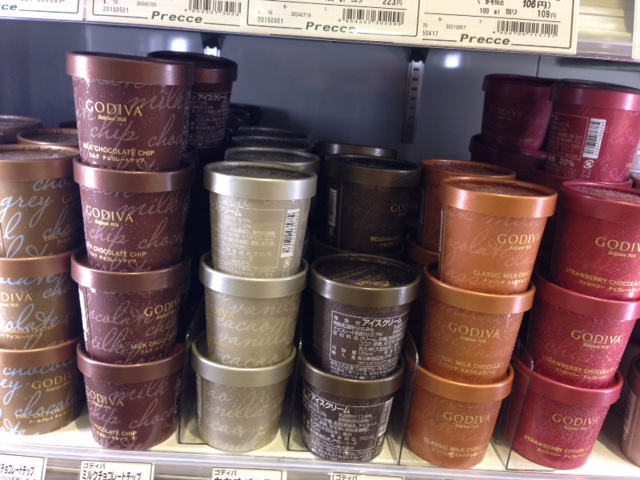 Earlier in the summer Raku and I tried out Luke's Lobster Rolls in Omotesando. On most weekends you'll see a line of people stretching down the street, but on a weekday we were able to walk right up and order at lunchtime.

Even though it's right in the middle of Tokyo it has a really adorable New England feel, and the food was delicious. I'd never had a lobster roll before, but Raku has had many and she assured me these were good. They offer a "US" and a "regular" lobster roll - that refers to size, and specifically the amount of filling because the bread is the same size for each. I ordered the regular and thought it was very generous. Raku ordered the US for comparison and said she was able to pick several big chunks of lobster off to eat first and still have a nicely full lobster roll to eat afterwards. We got the sets for an additional 400 yen which includes kettle chips and a drink. I had a really good ginger ale, but they also serve beer.

The rolls are sold from a window, and service is quick. There's a little seating outside with umbrellas shading wooden benches, but you'll also see people standing around in the street eating theirs. We were able to snag seats, but we were there on a week day and the weather was a little drizzly.

I can't believe how quickly the summer is flying by! I've taken my time writing all about our time in Vietnam and Cambodia, barely mentioning John's sister's visit, and somehow it's already August.

After Ellie left it rained for two weeks straight, and then suddenly the temperature jumped from the mid 70's to the mid 90's. In the last week or so the cicadas have come out and it feels like the height of Tokyo's summer. Luckily, John and I have a little relief coming up.

Next week we're heading back to the US for John's brother's wedding, and then I'm hanging around a little longer for another friend's wedding. We are both so excited to see our families, escape the Tokyo heat, and spend some time in the mountains! After John goes back I've got plans for beach weekends with my sister and some fun travel before the second wedding. By the time I'm back in Tokyo it will be September and soon fall will be on it's way.

Afternoon Tea at The Metropole Hanoi

After we made our reservations to stay at the Metropole Hotel I was really excited to discover that they have an afternoon tea, and that it included a chocolate buffet! When everyone caught sight of it being set up it didn't take any convincing that we needed to go.

The tea gets a lot of rave reviews and some people say it's a Hanoi must-do. I think the location is beautiful and the chocolate buffet is absolutely stunning, but to be honest I didn't find it as relaxing as most of the afternoon tea's that Raku and I have gone to.

I'll get my two complaints out of the way, and then you can focus on the chocolate. My biggest (and most legitimate) complaint is that each person only gets one small pot of tea that holds about 2 cups. Maybe I've gotten spoiled in Tokyo sipping endless cups of tea, but with the amount of chocolate on offer you really need more to drink! We ended up ordering a couple bottles of sparkling water for the table, but it kind of changed the whole experience. My other complaint is probably more our own faults, and it is about self-control. The chocolate buffet is so gorgeous and indulgent and wonderful, but it's way too easy to wolf down a plate of chocolates and then feel sort of sick (just ask our husbands.) Raku and I did a better job of pacing ourselves, but it just didn't feel as relaxing as the usual tiered tea tray.

You're probably reading this and thinking, "Are you kidding me? What is wrong with this person that is complaining about a chocolate buffet?!?" You're probably right. The set up, as I'm already said was so beautiful, and the quality of the food was excellent. There was an entire chocolate ice cream station with fresh fruits, sauces, toppings, and ice cream in silver pots. There were also extensive selections of truffles, cakes, macarons, and a small side table of sandwiches to help balance out all the sugar. On top of that you could special order chocolate cocktails or chocolate milkshakes.

We walked right in on a Friday afternoon and had no trouble being seated without a reservation. So, if you're thinking about going, I'd recommend it - but remember to pace yourself and don't drink your tea too quickly.